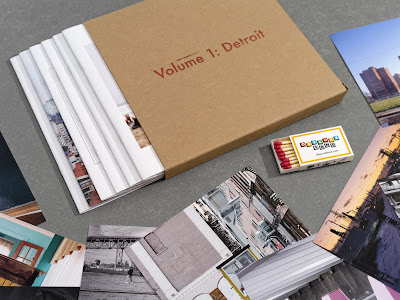 I have been selected by Obscura Land, an independent publisher in Detroit, to be a part of their inaugural publication.

Obscura Land will be publishing a series of 5 monographs on a quarterly basis. Each one will feature a specific Detroit photographer, as well as a sixth monograph that will showcase 14 additional photographers.

My photographs will be part of the sixth installment, with the cover of that piece featuring my 2013 photograph, Urban Tourists No.1. That image is part of an unfinished portfolio I've been working on, that explores the phenomenon  of reverse-migration, and with it, the flow of people and populations back into the city of Detroit, as it trends (in appearances anyway) toward rebirth and gentrification.

The publication is is being offered in three separate subscription packages, with each one offering progressively more than the previous. If it sounds a bit convoluted, go to their site, it's explained rather nicely in the video featured on their website. https://obscuraland.com

Tom Stoye
Tom Stoye is a photographer, born and raised in Detroit, Michigan. Tom's primary interest in photography is the use of the camera as a narrative tool, to tell stories derived from his own personal experiences.